Editing of all objects in the process D2000 CNF is being performed in the configuration dialog box, a specific part of which is common for all editable objects and another part depends on the type of edited object.

A text string describing the eval tag. Maximum: 128 characters.
Possibility to use the Dictionary (to open press CTRL+L).

Value type selection of the eval tag. Admissible value types are listed in the following table.

Technical units of the eval tag. Maximum: 12 characters. Possibility to use the Dictionary (to open press CTRL+L).

Technological limits may be defined for eval tags of the Ce - integer, Ae - analog and TmR - time interval type. There are four limits: VHL, HL, LL and VLL. Limit may be specified either directly - by entering a value into the input field, or its value may be defined by a system object (dynamic limit) - the button placed right from the input field.

Values of individual limits determine the state of the eval tag according to the value. The relation eval tag value - limits gives 6 possible states.

As the limits can be dynamic (determined by the object value), a situation may occur, when the condition VLL<LL<HL<VHL is not met (the limits crossing). The eval tag is then in the state Limit Problem. 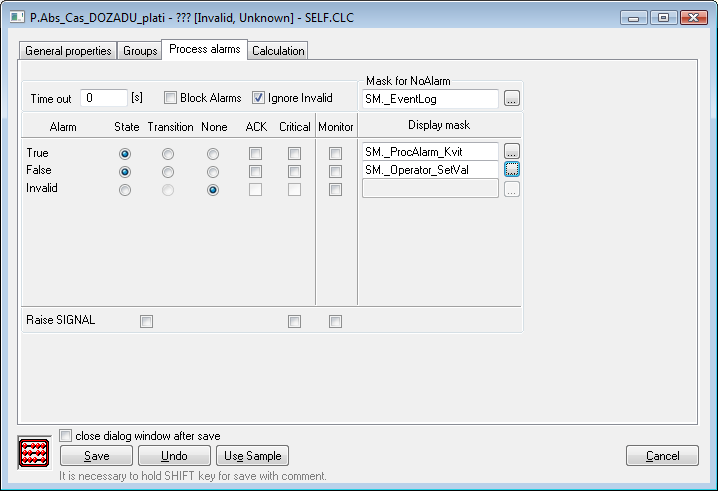 Time delay (in seconds) for the evaluation of process alarm. Process alarm is raised, if a cause of raising the alarm is valid at least within this period.

If the option is checked, it will remove invalid values when evaluating one of defined process alarm.

Selection of a display mask, that will be used in process D2000 HI (the Alarm list - the Event description column) after changing the status of one of the defined process alarms into the Normal state.

Individual items allowing the settings of parameters of process alarms are ordered in a table. The table contains the following columns:

Generating the signal means, that the system tag Signal_Trigger is set to TRUE value.

The arithmetical expression that determines the eval tag value. The expression may contain the extended syntax, may be written in several lines, and may contain a comment. Comment begins the character ';' and finish at the line end. For example:

Note: Typing the character '^' after the name of an object of Structured variable shows the list of all structure columns.

For more information on expressions see the chapter Mathematical expressions in eval tags and events.

Other value types are not converted.

Buttons to select an object of D2000 system. Selected object is inserted into the expression on the current cursor position.

Buttons to select a constant. Clicking it, opens the dialog box containing the list of predefined constant. Selected constant is inserted into the expression in the current cursor position.

Buttons to select a function. Clicking it, opens the List of functions dialog box. Selected function is to be inserted into the expression at the current cursor position.

Buttons to select an attribute. Clicking it, opens the dialog box containing the list of attributes. Selected attribute is inserted into the expression at the current cursor position.

Value of the object before beginning the calculation. Maximum: 20 characters.

) checks the start value and, in case of unsuccessful conversion, reports it.

If no target column is defined, the value of the expression (the input field Expression) will become the value of an eval tag. If is defined, it must contain the reference to a column of an object of Structured variable type in form: ObjectName[0]^ColumnName. This notation defines a structured variable column, which will contain the results of the expression evaluated.

Note:
If a constant expression of value 1 is defined, the process D2000 Calc (admistrator of objects of Eval tag) type ) ensures that all fields of a defined column will have the same value of 1.

If there is an expression Sec+1, the process D2000 Calc (admistrator of objects of Eval tag) type ) ensures that all fields of a defined column will have the same value, which corresponds to the value of system variable Sec increased by 1.

Obviously the following equation can be formed:
ProductsOK = ProductsALL - Rejects

Provided that the columns ProductsALL and Rejects are populated fully automatically and the value of the column ProductsOK is to be determined, it can be done with the configuration of an eval tag as described below:
Expression:
SV.Production[0]^ProductsALL - SV.Production[0]^Rejects

Calculation of the difference will be in the column SV.Production[0]^ProductsOK.
Note: The expression may contain references to columns of other structured variables.

Expression evaluation period (hour:min:sec). It is defined only for the periodical evaluation method of an eval tag.

Time offset of the basic time interval (hour:min:sec). It is defined only for the periodical evaluation method of the eval tag.