in the Main toolbar (or pressing F2) opens the window containing a list of all alarms. You can get information on all defined alarms in the D2000 system (system and process alarms) including current alarms in this window and to acknowledge, block or unblock selected alarms. The window is also opened after mouse click on the bulb icon located in the corner left bottom of the D2000 HI desktop. 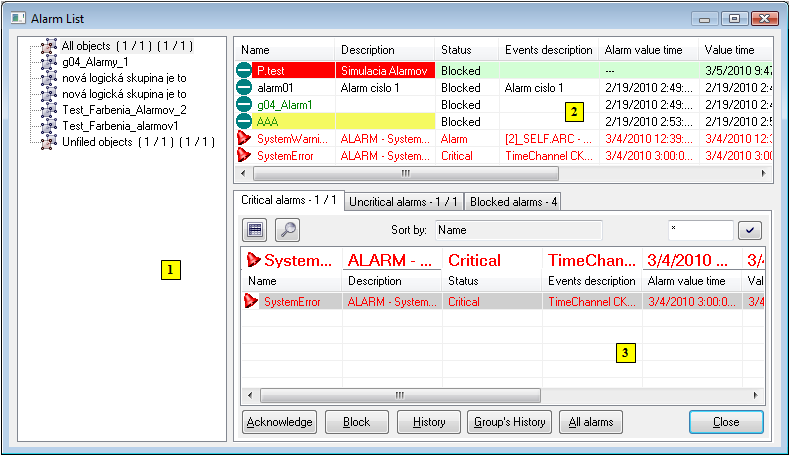 After choosing one of the defined alarm groups, the content of all tabs is reduced to the alarms that belong to the selected alarm group. Groups, with at least one active alarm, are marked by the red icon and the counts of unacknowledged / all critical and uncritical alarms of particular group is enclosed in the brackets after the group name. If alarm group contains no alarm,  the set of characters -------- is followed empty brackets.
After selecting particular alarm in one of the tabs, the color of all logical groups containing selected alarm will get grey. Alarms not included in any alarm group are assigned to the Unfiled object alarm group.

This list contains the last five alarm events in order of their occurrence. The list is not affected by selecting a logical group.

Clicking on one of the tabs shows information and controls for corresponding alarm type.