included in the Main toolbar (or select the item New Picture from the menu System). The following dialog box appears. 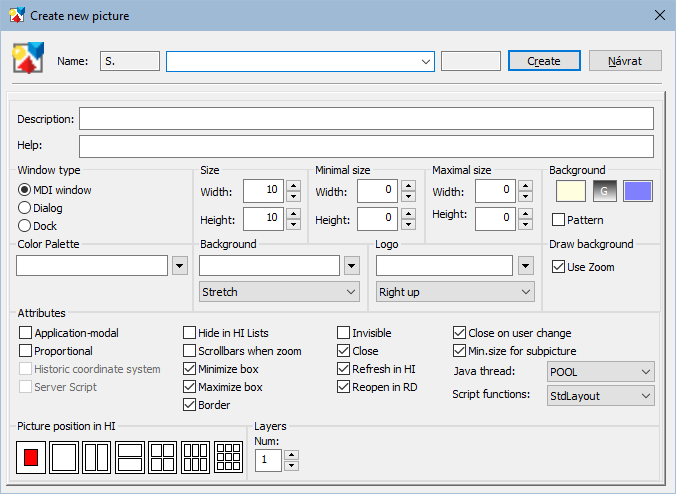 Description of the picture.

Possibility to use the Dictionary (to open press CTRL+L).

The parameter allows defining a page of application help to be opened after pressing the F1 key while the picture is active. If the parameter is not defined, the title page of D2000 help will be opened.

The following parameters define the size and background color of the picture.

* Exception for pictures with titlebar - minimum size is 100 pixels (a feature of the Windows operating system).

The process D2000 GrEditor also allows the user to resize the picture in another way than in the dialog box above mentioned. This way is described in the topic Resize a picture.

The configuration dialog box allows defining two bitmaps - a picture background and a logo placed in the picture foreground.

A list for the second bitmap (logo) contains all bitmaps placed in the directory BITMAPS (a subdirectory of the application directory).

The parameters define a type of window containing the picture contents and its behaviour. The default setting is MDI window on the desktop of the process D2000 HI.

This parameter enables to select a color palette that will be used for a given picture. To select the required palette, click the button next to the entry field.

The dialog window for selection of required palette opens:

They define the special features of the picture.

* If both minimize and maximize checkboxes are not checked off, the picture does not contain these buttons. If one of them is checked off, both are visible but the disabled button is inactive.
(Note: Above mentioned is not applied to the pictures opened in other picture - because these pictures do not have a title bar).
If the picture is opened in D2000 HI, the minimize, maximize and close buttons are placed in the upper right corner.

A picture may have from one to ten layers. If the number is greater than 1 then there are entered the parameters of the layers (number and ratio of reduction (as in the scale maps)), the range, from which the layer is visible, e.g. 5 means a drawing ratio of 1: 5). The basic first layer has a resolution for zoom 1: 1 - e.g. picture resolution 8000:6000, in which the picture is drawn.

The parameters define a behaviour of a picture in the process D2000 HI.

The parameter defines the position of the picture on the desktop after opening in the process D2000 HI and its behaviour when it is resized. There are several positions on the HI desktop.

The first position places the picture, opened in HI, in the centre of the desktop in the original picture size. Other positions change the picture size to fill selected part of the HI desktop. The position and relative size of the picture is represented by the red rectangle.