For such an application, the D2000 system consists of two or several application servers (processes D2000 Server).

The following figure shows D2000 system with two application servers (A and B): 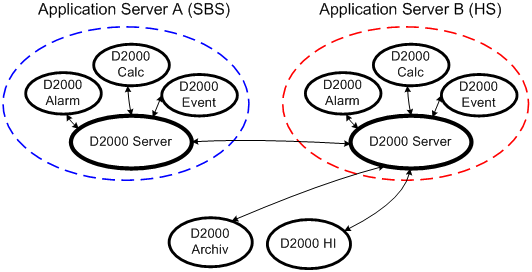 Redundant system consists of one or several application servers. The servers form so called Redundant group (RDG) which has configurationally assigned name. Each of the application servers can be in different states. In ordinary circumstances (during the standard operation), there is one server in the state HOT Server (HS) and the others are in the state STANDBY Server (SBS). HS is active and as the only one performs all tasks resulting from its configuration. All SBS servers check the presence of the HS and they are connected to the HS as client processes. Process name is the same as server name with the suffix KNL in the RDG. The HS keeps all SBS servers informed about changes in the configuration and the current values of all objects included in the configuration. Therefore, each of the SBS servers is capable of taking over the HS function at any moment.

For such a configuration of redundant system, there are several methods for connecting clients to application server.

Some other properties of RDG :