Graphs are being defined in the process D2000 HI. To configure them, select the Graphs item from Configuration menu and then select particular action (see the topic: Configuration of composition, graphs and reports).

Except generally described actions (opening, deleting, assigning to logical groups), you can carry out the following action with graphs:

To create a new graph, enter a name in the New object dialog box.

The system may automatically extend a graph name with an extension and prefix that are defined in this D2000 system application.

The dialog box for editing the graph settings will be opened after entering a name. Procedure is the same as during graph configuration.

When the new graph is created the point, without object of D2000 system, is predefined in bookmark Objects and analogue, full dynamic axis in bookmark Axes.
Default values are taken from values for dynamic graphs.

Modifying the graph configuration is performed in the following dialog box: 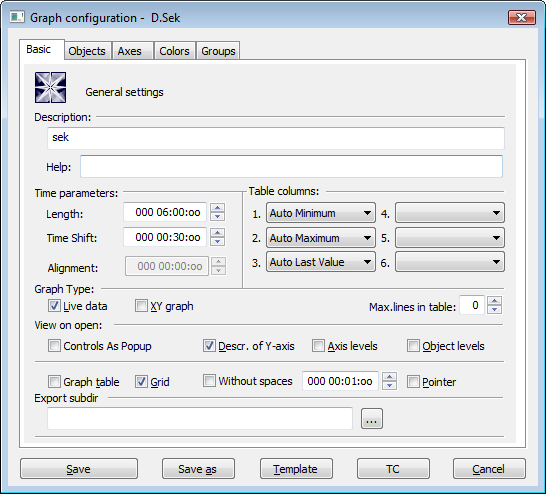 Click on the tab of corresponding page to switch to the required page.


The bottom part of the configuration dialog box contains the following buttons: