The exception is the bits, which are set directly by a value (e.g. for ASDU 1, the 0.bit is not set by the A flag but by the value of output I/O tag).
If the Invalid attribute is set for a new value, the highest bit (IV) will be set in the status byte for all ASDUs (except for ASDU 21, which does not have a status byte).

* - Status is taken as low 2 bytes, Status change detection is taken as highest 2 bytes of a 32-bit integer.

The following ASDU types in the direction of control are implemented (from the control station to D2000, also the opposite direction in balanced mode):

When writing values, the value of 6 [Activation] is expected as CauseOfTransmission. The response of the controlled station depends on the setting of the CMDC parameter. Originator ASDU address will be used the same as is in the received command.

Originator ASDU address (OA): initial OA is set as TCP line number in the configuration. The address will be used for the optional sending of the ASDU 70 [End of initialization] at the beginning of a connection and always for sending new values.
After receiving ASDU 100 or 101, the current values of all output I/O tags are sent (which don't have an Invalid attribute set) with the same OA as contained in ASDU 100 or 101.
As responses to received commands (ASDU 45..51, 58..64), the confirmations using the same ASDUs as received command are sent.

The D2000 system also supports a balanced mode. In this mode, the task of controlled and control stations is symmetrical. In this mode, the D2000 system sends commands and ASDUs 100/101. The balanced mode may be used only if it is supported by the partner station. An advantage is that the D2000 system can send ASDU 100 [Interrogation Command] a 101 [Counter Interrogation Command] and receives the current values of input I/O tags (configured as ASDU 1-40) after the connection was disconnected and re-established. It is suitable to configure single-shot commands as ASDUs 45 - 64; they are not repeated after re-establishing the connection.

Writing of an output I/O tag:

Note: Starting from D2000 version 7.02.004 the flags A to P of the value of the communication line are used for informing about connected active clients. An active client is a client who after establishing the connection sent U-frame StartDT Act, i.e. asked for sending the data. The first connected active client will cause a change of flag A to TRUE, the second flag B, etc up to flag P and continuing again with the first flag A. If the client sends the StopDT Act U-frame  (requesting the server to stop sending data) or disconnects, the value of its flag will be changed to FALSE.

The Browse button opens a browsing dialog for the station address. If the communication is functional, a dialog with the ASDU addresses received so far is displayed. The Refresh button can be used to clear the list of received ASDU addresses. 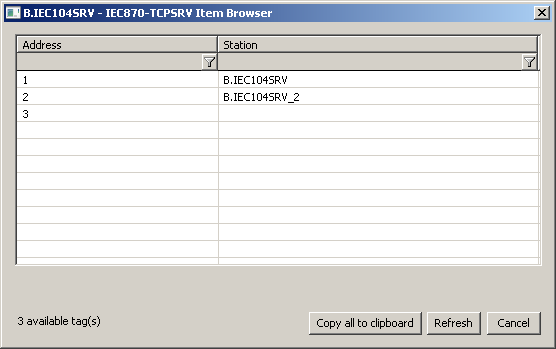 The following parameters can be defined as station protocol parameters:

A string containing the protocol parameters is being defined as follows:

If a keyword with an invalid value in the initialization string is found, a corresponding default value according to the Table 3 will be used. Defined parameters, except for OIC, OCIC and FST are valid for the entire line - i.e. it is enough to define them for one station on the line.

For the I/O tags, it is possible to discover the list of objects, as long as the KOM process is running and communication with a station is established.
Clicking the Browse button opens the IEC870-TCPSRV Item Browser window and displays a list of objects that have been read so far. The object list is created dynamically as a result of received messages.

The list of objects is dynamic, i.e. when a new value arrives in the KOM process, it is updated. Filtering in individual columns is also supported, asterisks can be used in the mask (e.g. *Short*).

Double-clicking on a particular line will cause the Address parameter to be inserted into the configuration of the I/O tag from which the IEC870-TCPSRV Item Browser window was opened.

The Refresh button clears the list of values in both the CNF and the KOM process.