The protocol (known also as IEC 870-5-104 or IEC-104) allows reading and writing data, operating on the basis of TCP network communication. Implementation is, according to the IEC 60870-5-104 standard, as follows:

The following ASDU types are implemented in the control course (from D2000 system to controlled station and also vice-versa in balanced mode):

**** - ASDU 250 can be used for communication with Ipesoft 870-5-104 Server. The command will ask for historical values (within specified interval) from the server, which will arrive as ASDU 251 (or newer ASDU 249 that use 64-bit values for improved precision, if the protocol parameter D2H64 is enabled on the server). The reading of the archive values can be executed by means of the GETOLDVAL command with the parameter containing the name of the I/O tag or station (in this case, the values of all I/O tag are read gradually, i.e. reading of the next tag starts after the reading of current tag is done).
Response for ASDU 250 is again ASDU 250 (with CauseOfTransmission=7) and with the return code:

Next (is the return code was 00) the ASDU 251 with archive data will be sent and the termination ASDU 250 with CauseOfTransmission=10.

The D2000 KOM process is connecting to the TCP port and sends a StartDT Act U-frame, then a StartDT Con U-frame is expected as a reply.

For all the stations with a defined synchronization (see the article below), an ASDU type 103 [Clock synchronisation command] with CauseOfTransmission=6 [Activation] is sent, and a reply (depending on the Command Confirm parameter) is expected.

Then a sequence of 0 up to N I-frames with ASDU 100 [Interrogation Command] and ASDU 101 [Counter Interrogation Command] is sent, both with CauseOfTransmission=6 [Activation]. The I-frames are sent for each station with at least one input I/O tag (i.e. Ai, Di, Qi, Ci). As a response, there is expected (in any order):

The other side can also send frames with ASDU TypeIdentificator=100 and CauseOfTransmission=10 [Activation Termination]. However, the D2000 KOM process does not consider it to be an error if such no frames are received. The order of sending ASDU 100 and 101 as well as disabling their sending is defined by the Order of IC and Order of Counter IC parameters.

The D2000 system also supports a balanced mode. In the mode, the task of controlled and control stations is symmetrical. In this mode, the D2000 system receives commands and confirms them. The balanced mode may be used only when it is supported by the partner station. An advantage is that the D2000 system sends the current status of output I/O tags (defined as ASDU 1-40) as a reply to ASDU 100 [Interrogation Command] and 101 [Counter Interrogation Command] requests. It is still suitable to configure single-shot commands as ASDU 45 - 64; they are not repeated after re-establishing the connection.
As the protocol supports the balanced mode (partly it is a server), the rules of server protocols apply to it.
The output tags, which are configured as ASDU 1-40, do not go through the Transient status (i.e. they are considered as if in the configuration of I/O tag, Output control tab, the I/O tag output mode is set to Command). The writing is considered to be successful if there is a connection with the server at the time of writing, otherwise, the writing is unsuccessful.

The Browse button opens a browsing dialogue for the station address. If the communication is functional, a dialogue with the ASDU addresses received so far is displayed. The Refresh button can be used to clear the list of received ASDU addresses. 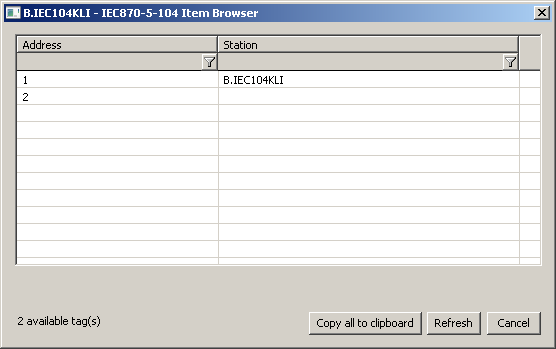 Defined parameters, except for Order of IC, Order of Counter IC, and Force Slave Time, are valid for the entire line - i.e. it is enough to define them for one station on the line.

Example 1: Client communicating with the server SrvA on a redundant network.

If a communication segment drops out (e.g. IPA1 failure) the client establishes a connection with the server SrvA using the address IPA2.

Example 3: Client communicating with the redundant servers SrvA, SrvB on a redundant network.

The client communicates with both the servers. If one network segment drops out (e.g. IPA1 failure), the client establishes a connection with the SrvA server using the IPA2 address.

The clients communicate with both servers. If one network segment drops out (e.g. IPA1 failure), the clients establish a connection with the SrvA server using the IPA2 address. After switching the active/passive statuses of the ClientC and ClientD clients, they keep communicating with the servers, however, only the active client sends commands. New values are sent by the active server.