A redundancy of communication process KOM reduces the loss of telemetric data. 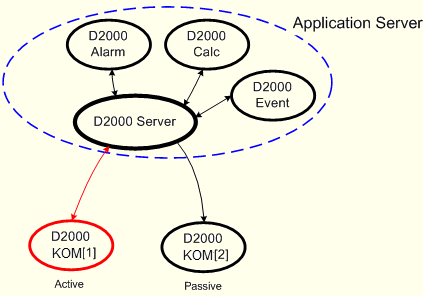 It holds the following for value of the object SELF.KOM:
If, at least, one instance is running the process will acquire the value Run. At the same time, each running instance of process sets the user attribute (flag) of value as follows: instance 1 sets the flag B, instance 2 sets the flag C,...

The parameters of the communication process (kom.exe) can also define the instance number as follows:

The above mentioned method allows starting the several processes D2000 KOM with the identical name at the same time.
The individual processes will execute the following actions according to their status: