Using the redundant archiving reduces the probability of an archive data loss or interruption of the archiving process. 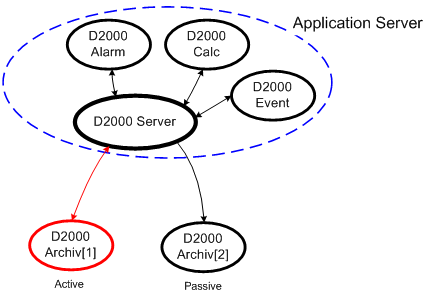 Redundant archiving is realized by increasing the number of the archive processes ( D2000 Archiv) in D2000 system with no need to define them in the DODM model.

The DODM model defines object of Proces type with the *.ARC suffix (generally SELF.ARC) as the archive process ( D2000 Archiv), that has some children – objects of Historical value type. After running process D2000 Archiv, it executes operations defined by the configurations of its children. The operations can be described as follows:


Redundant archiving is realized by means of several archive processes that run simultaneously (so-called instance archives) - their names are identical (e.g. SELF.ARC). The only difference between them is so-called instance number, that can be within the range of 1 ... 15.
For value of the object SELF.ARC there is valid: if at least one instance is running, process will get the value of Run. At the same time, each running instance of process sets the user attribute (flag) to value as follows: instance 1 sets the flag B, instance 2 sets the flag C,...


The parameters of the archive process (archiv.exe or archiv_ora.exe) are extended with the possibility to define the instance number:


Note 1:
If at least one instance archive is running, it is not possible to run non-instance (/WSELF) and vice-versa.

Practically, each of the instance archives is installed on different computer - it allows to maintenance it with no dropouts of the archive process.

may be copied to the registry key of the instance archive process:

must be copied to the key of the instance archive process:

It is sufficient to rename the first key or to duplicate it by using export and import tools in the Regedit.

Warning (for D2000 v.7.01.011 and older): If instance archive has been created without the operation described above, its key in the Windows Registry is to be created with some settings (predefined values) but
the key will not contain neither all required settings nor changes performed in the configuration of non-instance archive !!!

The contents of both keys can be viewed by using the tool D2000 Application Manager.

Note 4: If a preferred instance is starting while the other one has already been activated, the preferred one become active after executing of all required operations that are necessary after starting the archive (if the archive is ready).

If the archives runs redundantly, there is a possibility to split a load according to read requests among more active instances.
For D2000 Archiv process, there exists the parameter LoadBalancingMode in the system registers of application. This parameter activates/deactivates the Load balancing.

If value = 1, the mode is activated. In this mode, the setting of active and preferred instance is ignored (Tell commands SET_ACT_INST and SET_PREFERRED_INST).

The parameter of instance %ArchiveName%_%InstanceNumber%_Usable defines whether the instance will be active in Load balancing mode. The valid values are 0 - passive, 1 - active.

All parameters will be created automatically when starting the instance of archive or can be set manually by Tell commands SET_INST_USABLE and SET_LOAD_BAL_MODE.

If only passive instances run, they will not become active but some of them will be used when reading from archive.

Note: The instance can become active after executing of all required operations that are necessary after starting the archive (if the archive is ready).