The following picture shows D2000 system with the redundancy of the communication routes between processes D2000 Archiv and D2000 HI and process D2000 Server. 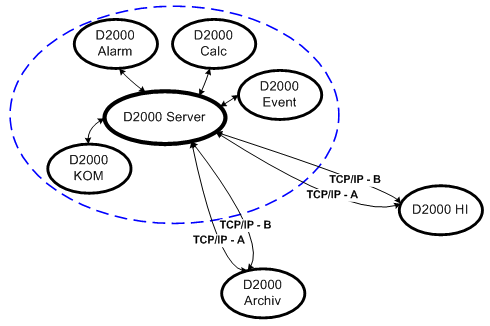 The DUAL TCP/IP technology enables to realize the connection among process D2000 Server and selected (or all) D2000 system client processes via two independent TCP/IP channels. In case of failure of one of the channels, the communication is automatically and transparently rerouted to the other channel.

The DUAL TCP/IP technology can be used if there are just two independent TCP/IP networks between the computer with process D2000 Server and the computer with given client process (each of the computers is equipped with two network cards). The DUAL TCP/IP provides for redundant connections between process D2000 Server and the client process so that the D2000 system application can work if one of the networks is damaged or dropped out.


D2000 systems allows to define which channel is to be used as preferred, i.e. if the channel is functioning, it will be always active. The setting is defined in the system registry on the client's side and there are two ways to do this: