SerialOverUDP Device Redundant, SerialOverUDP Line Redundant and SerialOverUDP System&Line Redundant communication lines were designed for support of "Serial to Ethernet Device Servers" of NPort series. NPort serial devices are the powerful compact switches of RS232/422/485 interfaces on TCP/IP Ethernet. These devices transmit data, received from serial line, to UDP packets and send them to one or more IP addresses and ports (D2000 KOM process locality). Likewise, NPort serial device sends data, which have been received on specific UDP port, to a serial port.
The transmission parameters of the serial line are set in the configuration of NPort serial device and cannot be changed or set through D2000 System. Data, transmitted in UDP packets between NPort and D2000 KOM, contain only data of the serial communication. They contain neither the control nor the check characters (e.g. handshaking).

This line supports a redundancy of NPort serial devices and also working in D2000 Redundant System when the communication protocols, supporting a redundancy, are used.

It is UDP port, it binds KOM process and receives data from NPort serial devices. Local Port must correspond to NPort configuration (the parameter Port in the line where IP address with KOM process is set). A local UDP port must be a unique, neither another line nor any application (out of D2000 System) can use it.

IP address or hostname of NPort serial device. It is UDP port which receives data to transmit. Port value must correspond to NPort configuration (the parameter "Local Listen Port").

Check this option if you use a redundant configuration of NPort device.

IP address or hostname of a backup NPort device. It is UDP port which receives data to transmit. Port value must correspond to NPort configuration (the parameter "Local Listen Port").


Switching between primary and backup device

This is a simple connection of the NPort device which replaces the asynchronous serial port directly in PC. No redundancy is used including NPort devices, D2000 System and the network interfaces. 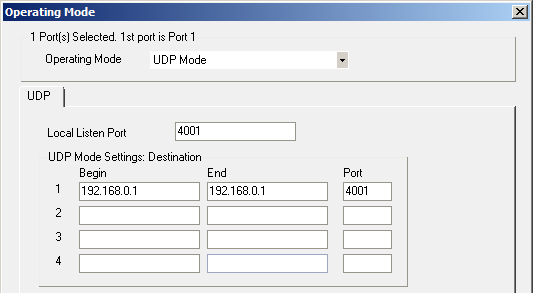 The port 4001 is set for Local Listen Port. Data are sent to D2000 KOM process 192.168.0.1, which uses also the local port 4001. We recommend to use the same port number within the configuration of one communication line. 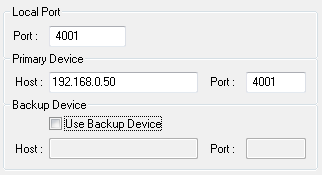 This is a dual redundant connection of NPort devices without D2000 System Redundancy and Ethernet network infrastructure.

The configuration of NPort 1 and NPort 2 must be the same as it is mentioned in the Example 1. 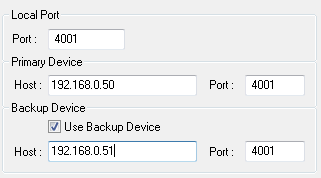 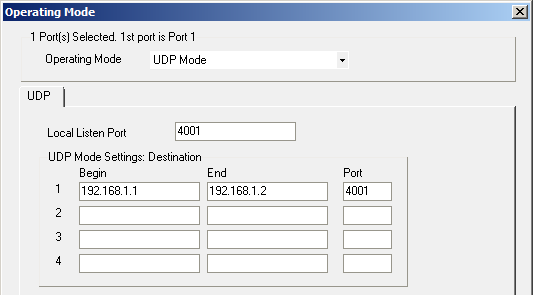 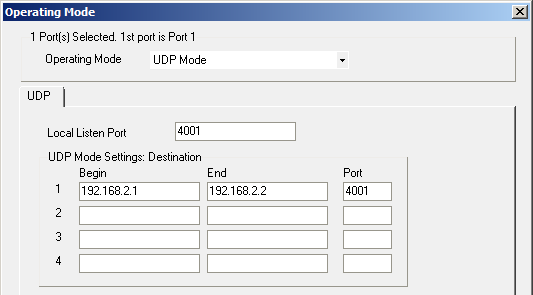 The above mentioned settings show that both NPort devices send data to both D2000 servers (i.e. KOM processes), to IP addresses in that network in which it is connected (NPort 1 in Ethernet A and NPort 2 in Ethernet B).

Both NPort devices (primary and secondary one) are set in D2000 communication line configuration: 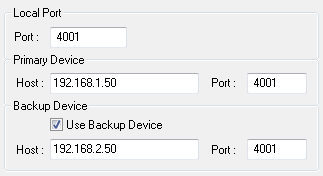 This configuration is complete redundant and resistant to failure of any dual device.

Note: The line is supported for communication protocols used in main and backup electro-energy dispatching of SED - SEPS.