D2000 SES process ensures the start of virtual SEE processes. The functionality of SES server is implemented in the process event.exe. D2000 SES may service both the remote ESL scripts and the local parts of ESL scripts for TCL. The handling of script types is defined by a start parameter.


The startup of virtual SEE processes is conditioned upon the request from HIP process. A typical configuration is shown on the following diagram. 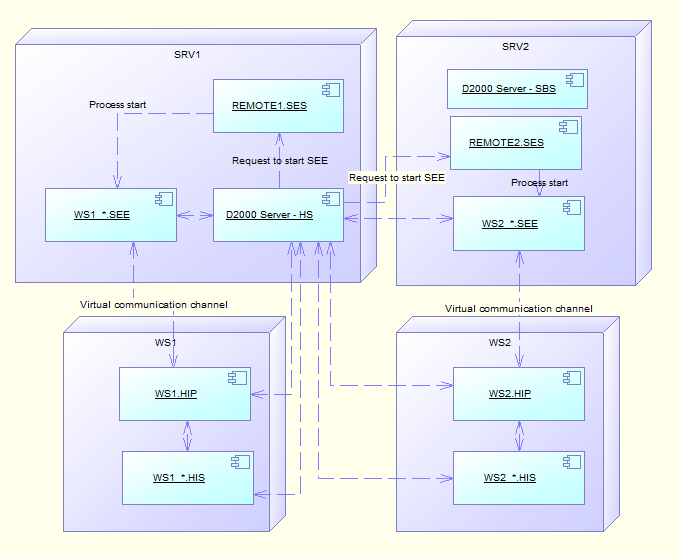 The diagram shows the configuration of a redundant application. The servers SRV1 and SRV2 ensure this redundancy. SRV1 is HS (Hot Server) and SRV2 is SBS. The connection of  WS1.HIP from the client work station and opening the picture, which contains both the local and remote ESL script, causes that D2000 Server HS ensures the startup of proper process WS1_*.SEE. This startup is done by SES process.
As, there are two running SES processes in the application, the process with the least running SEE processes will ask for the start.
This principle enables to use the computing power of both servers (SRV1 and SRV2). After starting, SES processes must connect to D2000 Server, not to the redundant group (they must be started with parameter /S, not /RD or /RS).