Editing of all objects in the process D2000 CNF is being performed in the configuration dialog box, a specific part of which is common for all editable objects and another part depends on the type of edited object.

A text string describing the switch. Maximum: 128 characters.
Possibility to use the Dictionary (to open press CTRL+L). 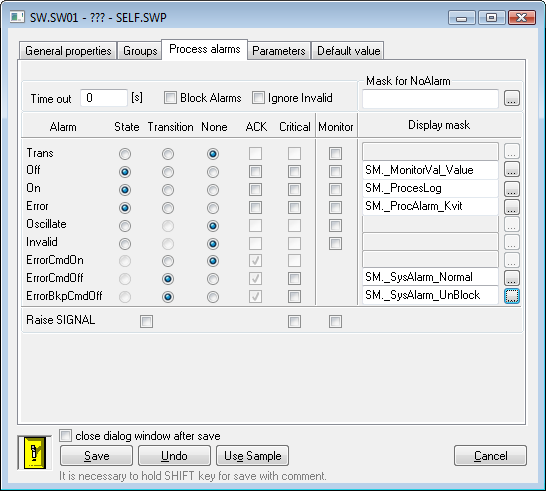 If the option Block Alarm is checked, defined process alarm will not be evaluated.
Individual items allowing to set parameters of process alarms are ordered in a table. The table contains the following columns:

The parameter includes three checkboxes with the following functions:

Configuration of blocking levels of the switch. Blockades A and B must be objects of Boolean type. If the value of a blockade is TRUE, the respective blockade is active. Checking the option Active enables the blockade A after starting process D2000 Switch.
Blockade A can be controlled by an operator via the dialog box in process D2000 HI. Blockade B cannot be controlled by operator at all.

An operator can turn on / off or backup turn-off the switch via the dialog box in process D2000 HI. The input boxes On, Off and Backup Off allow to define output I/O tags (either by writing into input box or by selecting from the dropdown list placed on the right to each of the input boxes), which will be assigned the given value at operator's command. The operator's command is to be understood as clicking on particular button in the control window of the switch.

If the control object (the option Switch) don't get any value after a period defined in the parameter Timeout, the command is regarded as unsuccessful and process alarm is generated (if is defined in process alarm configuration). If Timeout is 0, the testing will not be executed.

An operator in process D2000 HI can switch over the switch to defined default value and back.

If the option is checked, a default value (defined in the parameter Default value) will be used for the switch automatically after starting process D2000 Switch.

Checked Use default value allows to define a value from this dropdown box containing the list of possible values. Selected value will be used as default value for the switch.